Cancelling Oakmont 3/9/10 but Allentown was Amazing!

Good people,
I am very sorry to announce that we are cancelling our Oakmont Library event for 3/9/10. The library did not receive enough RSVPs. I don't know if I've ever cancelled an event before. It stings a little but rest assured we'll put another on- and I'll do a better job of getting the word out.
Conversely, our Allentown tour was a huge hit!
At Parkland Library on Thursday night we saw nearly 70 in the audience! The 10th grade of Parkland High was in full force as were their teachers. Erin was our host and she was extraordinary at making the event so successful.
From there we met with Eileen and the great residents of Luther Crest. We met a woman who told an incredible tale- her husband was shot down over China and he ejected. His parachute saved his life. He returned home and gave her the chute telling her to make a wedding dress out of it! (yes, that was his way of proposing). She did! The photo is below. It's stunning. She wore it and later her daughter and daughter-in-law 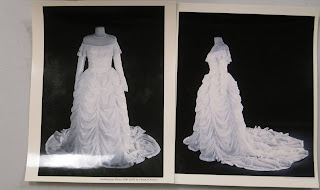 did the same. Now it belongs to the Smithsonian!
Then, it was on to the main stage at the SWLFest, an annual gathering of the short-wave heroes I highlight in my book. To say we had a great time would be an understatement. Although running late because we got lost, we dashed in and delivered a story they had been waiting to hear for some time. We must have had 100+ in the room. This story brought a few tears, some incredibly nice comments and one person pointing out that we had received the first ever standing ovation in SWLFest history! That's kudos to how powerful this story is.
We wrapped up our tour with a stop at Country Meadows in Wyomissing. Verna and the fabulous residents of Country Meadows couldn't have been nicer hosts. One WWII veteran even wore his jacket to the talk. He joked that he couldn't button it anymore but it still fit everywhere else! 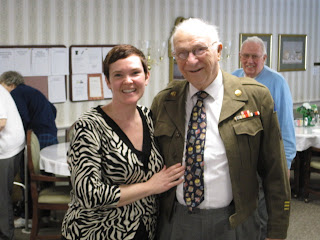 Thanks to all for a remarkable long weekend. We couldn't imagine spending it any other way.

And, for those who were planning to see us in Oakmont. My apologies. Let me know and I'll email you personally when we have another talk scheduled near you.
Posted by WWII Radio Heroes