Friends, I can't begin to tell you the delight it gives me to open my email and see a message related to POW relay in my inbox. This latest one was from Joy Kidney. She's given me permission to share it here and she's joined our Facebook Page (World War II Radio Heroes). And, do you know what her contribution means.... we are adding TWO more Heroes to our master list, bringing our total to 302!


My mother's family lost three of five brothers in WWII. The middle one, Dale Wilson, was lost just off New Guinea, the copilot of a B-25. They were never found.

My grandparents got three letters from the west coast from shortwave listeners. One is listed on page 176--Mrs. H.L. Flowers--but her letter was sent from Seattle, Washington.

The other two aren't listed: Nancy Street of Reno, Nevada, and M/M F. G. Dolliver of Los Angeles. I'd like to include them among these state-side heroes. They gave my grandparents hope for several months.

The same three people also named John Stack, the bomber's navigator, but none of the other four.

I'm writing a book about the Wilson family, and have a website with a WWII section. I'd started a blog piece called "Radio Tokyo Named Dale Ross Wilson as a POW."   JoyNealKidney.com 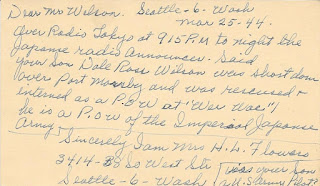 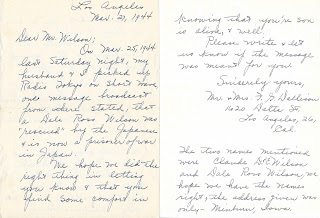 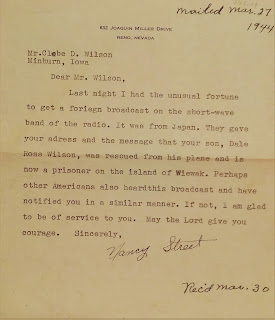