As a curious young girl, I was always in things I shouldn’t be- scaling closest shelves and plumbing the depths of attics to uncover hidden Christmas presents, foraging through drawers for secrets unknown, and rummaging through hidey-holes for stashed candy and treats. So naturally, after some thorough scavenging work, I came across my great-grandfather’s story. Tucked away in a cold, metal filing cabinet, I discovered a yellowing newspaper clipping with a colorful illustration of a diver, replete with large, metal, ominous helmet, surrounded by sharks of varying sizes and ferocity and an article detailing the heroic deeds of Frank William Crilley.

My great grandfather was a diver for the navy in the early twentieth century. A man who, as family traditions murmurs, taught Amelia Earhart how to dive. He wore the cumbersome, metal helmets, the ones seen in old Scooby-Doo episodes, a number of which account for the décor in my family home. While he was diving off the coast of Honolulu, one of his fellows, William F. Loughman, became trapped in the water, his air hose jeopardized. In danger not only of entrapment, but also of the pressure generated by the depth of the water, Loughman needed immediate attention. My great-frandather realized all of this. I can only imagine the tumult of emotions that must have assaulted him. Shock. Confusion. Fear. And finally determination, his single-mindedness in rushing to his friend’s aid. Under water for two hours and eleven minutes, my great-grandfather surfaced with Loughman, alive.

Frank William Crilley received a Medal of Honor for his courageous deed that day and recently a dive school in San Diego, California was named after him. Another building is also dedicated to the memory of my great-grandfather, located in the Navy Yard in Washington, DC. In addition to his Medal of Honor, he was awarded a Navy Cross. My own father, his grandson, followed in his footsteps and became a diver as well. 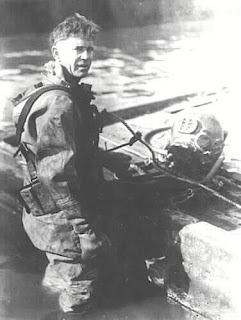 It is always amazing to discover pieces of your personal history. The awe of unearthing where your ancestors came from and the connections they have to your life is a bridging moment, an instance where history and the present flow together as one. All are alive in yourself and therefore society. When that history is alive and ebbing beneath the communal body the present and future are illuminated. To know that my great-grandfather not only participated in history but lives on written down and memorialized feels like a tribute to me and the person I am in some small way and I can only hope to add myself to that living memory.


Writer of this article, Mariah Crilley, has joined Lisa Spahr in promoting World War II Radio Heroes while a student at Chatham University.